As of April, the drinks shelf will have a real innovation: UNKRAUT, a still soft drink made from brewed tea, juice and real wild herbs, is launched. Under the motto “A little like you”, the fresh, natural and, above all, unconventional drink in three flavors aims to do one thing above all: to surprise! And that - according to the first consumer tests - was quite successful: In a survey by the market research institute Marketagent.com in September 2018, absolute top 1 values were achieved for attractiveness and purchase probability in the relevant segment!

A little like you.
„Wild, valuable & unusal“: The UNKRAUT credo, which is being introduced as a completely new brand from Egger Getränke, also describes the target group that we want to address with wild herbs. “Wild herbs are more than a drink. Wild herbs are a statement - for more individuality, non-conformance and adventure. This is exactly what our slogan "A little like you" underlines,” says Egger Getränke Marketing Manager Martin N. Eicher. The company has invested in a new tea brewing system in order to be able to produce the drink in-house. Bernhard Prosser, Managing Director of Egger Getränke, adds: “Wild herbs are not more of the same, but a real innovation. By that I mean not only the idea of freshly brewing a drink with real "non-herbs", but also the way in which we put it on the market and appeal to consumers. "

In an intensive process lasting several months, a total of three varieties were developed: All made from hot-brewed tea, natural fruit juice and cold infusion of real wild herbs. UNRKAUT nettle is a combination with white tea and grape juice, UNKRAUT dandelion consists of green tea and pear juice, and UNKRAUT red clover is made from roibo tea and apple juice.

Further facts: With a maximum of 17 kcal per 100 ml, weeds are low in calories, do not contain any added sugar or any additives or preservatives and are produced in a climate-neutral manner - also a rarity on the beverage market.

UNKRAUT all over Austria: a wild campaign for the market entry
Like wild herbs themselves, the launch campaign will be wild, fresh, and unusual. The first delivery of UNKRAUT takes place at the end of March. A major launch campaign will then start across Austria in May. Slogans such as “Pretty hard-boiled”, “Naturally wild” and “Everything but sweet” refer not only to the new drink, but also to the target group itself: UNKRAUT is “a bit like you”. The campaign can be seen on thousands of posters, city lights and a huge megaboard on Mariahilfer Strasse; In addition, the high-impact appearance will be implemented in print ads and online. What is striking is that the graphic implementation primarily picks up on the wild herbs it contains and clearly conveys the attributes of the new drink - naturalness, quality and wild freshness - just visually. The market launch will also be accompanied by striking street samplings and a number of other unusual guerrilla promotions.

The market is waiting for UNKRAUT

With UNKRAUT, the Lower Austrian beverage experts have evidently created an innovation that the market has been waiting for. In a survey by the market and opinion research institute Marketagent.com in September 2018, the high attractiveness of the product concept was clearly confirmed by consumers. Consumers showed a high willingness to try things out and were curious and rated the aspects of design, innovative spirit and naturalness particularly positively. In this first market test, UNKRAUT achieved top 1 scores for attractiveness & purchase probability in the tea segment.

From week 15 onwards, UNKRAUT will be available in 0.5 liter PET bottles in participating grocery stores across Austria. 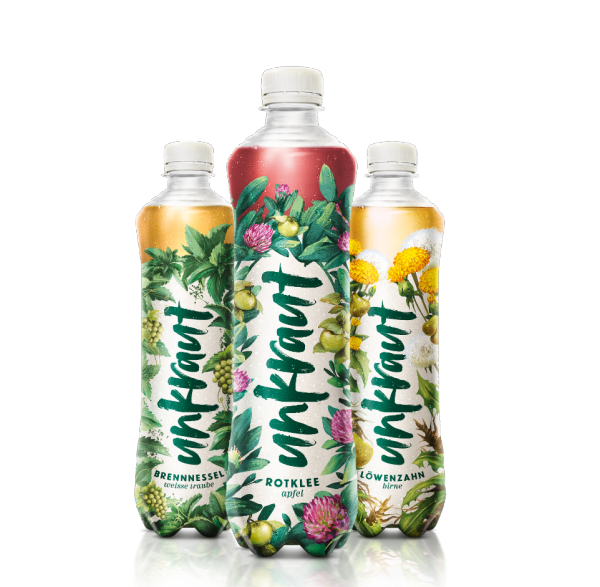 Egger beer in a "new look"

Granny's are now also available for the little ones